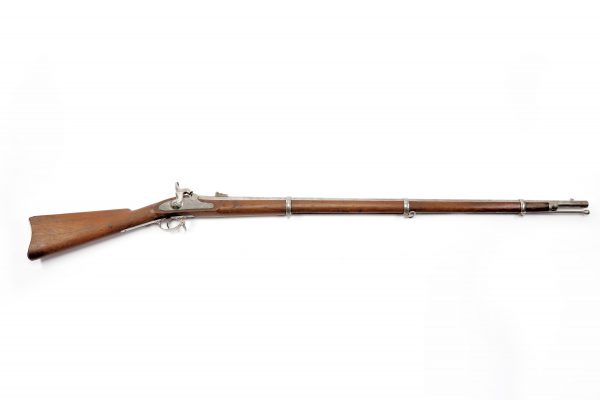 A very nice example of a Colt “Special Model” rifled musket.  It was manufactured sometime between 1861 and 1865, with a production estimate of 75,000 guns.  They were all made under a U.S. Government contract, for use in the American Civil War.  Most of the iron parts were finished in the white, with the exception of the nipple and rear sight.  They were finished blue.  The walnut stock is oil finished.  There are several Government inspector’s stamps.  “E.P.R.” is stamped at the breech of the barrel, as well as “STEEL”, “VP” over an eagle’s head, and “1864”.  The lock plate is stamped “U.S. // COLT’S PT F A MFG CO // HARTFORD CT” and “1864”, just behind the hammer.  There are two cartouches stamped in the left side of the stock, just above the trigger.  The musket still retains it’s original iron ramrod.

Condition: Lock, triggerguard and barrel bands retain much of their original polish – Barrel shows a less bright finish, and was probably cleaned, years ago – Stock has NOT been sanded or refinished, and retains most of it’s original raised grain, with several small bumps and dings, overall – Ramrod channel has some chipped areas – All markings and stamps are very good – Action is crisp and tight – Bore is mirror bright