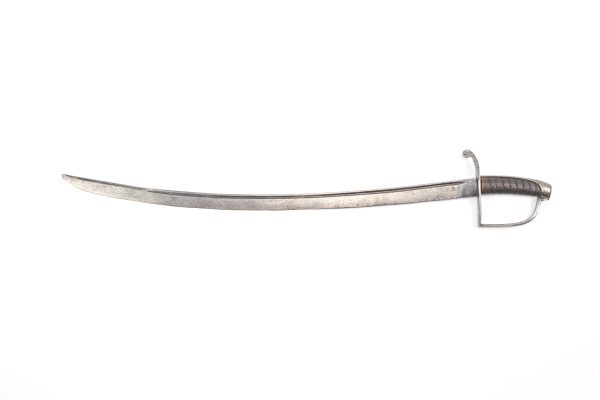 A Nathan Starr & Co., 1798 contract, U.S.Cavalry sabre.  These were the first swords made, under contract, for the new United States, following the American Revolution.  Therefore making them the first official U.S. sword.  It is stamped “U.S. 1799”, on the left side of the, single edged, curved blade, near the hilt. It is stamped “N. Starr & Co.” on the right ricasso.  The blade is iron with a narrow fuller extending to within 6 inches of its tip.  The wooded grip has an iron backstrap, and knuckle bow.  There were about 2000 of these swords made, of which approximately 1250 of them were lost at sea, making it one of the rarest American swords.

Condition: Iron has been lightly cleaned, years ago, and now show a nice dark age patina with some light pitting, and many forging flaws – Knuckle Bow and Backstrap have some heavier pitting – Grip has a wonderful age patina, and two cracks, on the left side, at the crossguard, also missing the leather wrap and wire – Markings are weak – NO scabbard