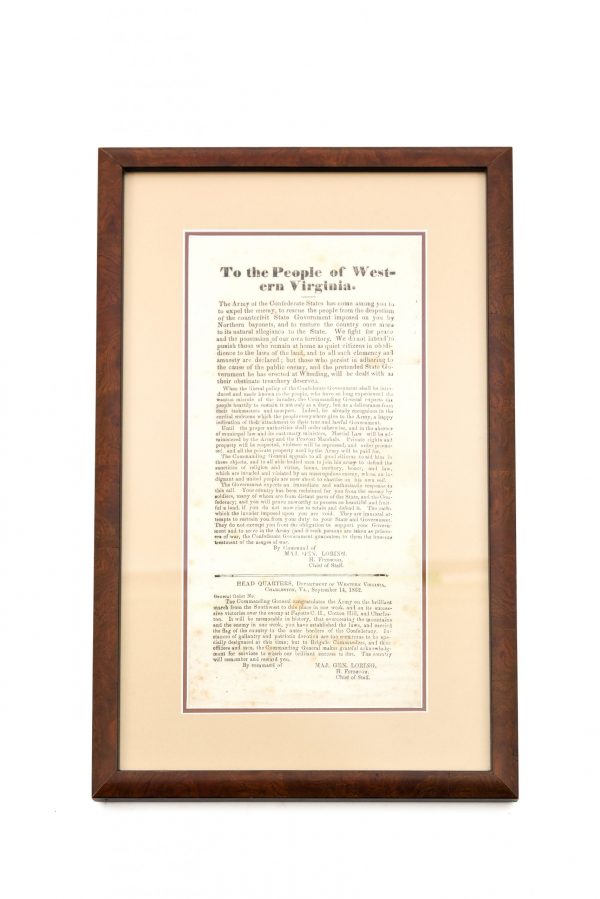 An original, American Civil War era, broadside, dated September of 1862.  It is a message to the people of West Virginia to remain loyal to the Confederacy.  It is signed by Major General William Wing Loring.  He issued this proclamation to the people for two reasons.  The people of West Virginia had seceded from the government of Virginia, setting up their own state with its capital in Wheeling.  They vowed an allegiance to the Union/North.  Loring threatens those citizens, who support this new government, as he considers them Yankee puppets, and a threat to the Confederacy.  He also calls on all good citizens to come to the aid of the Confederate Army, as it had recently reclaimed land from the enemy.  Major General Loring had a long military career, from 1846 to 1878.  He served in the Seminole Indian War, the Mexican-American War, all through the Antebellum years, the American Civil War and then in Egypt.  This broadside has been professionally framed.

Condition: Some minor toning and staining, appears to have been folded in thirds, at one time, no tears are evident, all text is readable – Frame is in very good to excellent condition