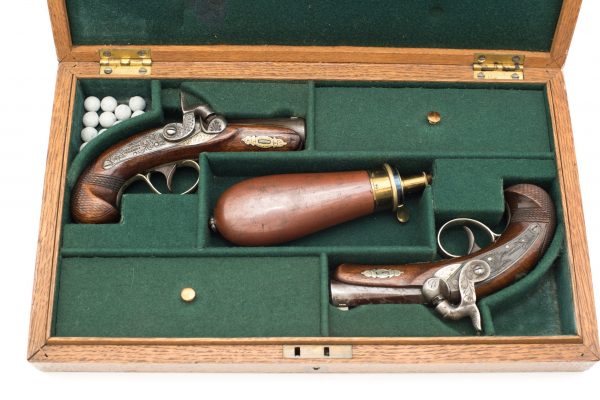 Pair of Henry Deringer single shot percussion pistols in their original oak presentation case with early Latter Day Saint’s History. Inlaid into the lid is a plague inscribed “TBH Stenhouse Salt Lake City”. The pistols are not perfectly matched to each other, but have always been cased together. One pistol has double bands at the breech, a “P” proof, seven-groove rifling, and typical pineapple finial on the triggerguard. The other pistol is just a slight bit different in styling. Included in the case is a bag-shaped Dixon powder flask, of the period, a mold, a nipple wrench, a cap tin, and a small powder measure. The interior of the light colored oak case is lined in green felt and is in the partition style, with brass fixtures.

Included, with the pistols, is a large binder of documentation and information. T.B.H. Stenhouse was an early Mormon pioneer, journalist, writer, and editor who wrote the book Rocky Mountain Saints. An original copy of this book accompanies these pistols. Mr. Stenhouse was also the publisher of the Salt Lake Daily Telegraph, and a prominent member of the Godbeite movement. The Godbeites were Mormon dissenters, as was his wife Fanny, who wrote Tell it All, a book about the LDS practice of polygamy. His daughter married Brigham Young, Jr., and Stenhouse was known to have given his close friend, Brigham Young, and almost identical pair of Deringers. A notarized document by Mrs. Helen Wipprecht states this cased set was purchased by her husband in 1931 or 1932 and owned by him until 1954 when he sold them to S.S. Cartwright. Mr. Wipprecht was the general auditor of the Union Pacific Railroad. Another letter of documentation is by S.S.Cartwright, dated 1971, traces the descent of the pistols in Utah.

This pair of pistols is pictured in the book Gunsmoke and Saddle Leather, by Charles Worman. The photo was provided by the Utah State Historical Society for that publication.

Condition: Both pistols are in very good plus to near fine condition – One pistol shows 90% plus overall brown with striping on barrel, bright case hardening on lock and breech, stock with some edge wear – Other pistol is in a bit lesser condition with slightly more wear, with an even brown patina on the barrel, traces of case hardening on the lock, and a good sharp stock – Case is very good plus to near fine, except for the case lid which is slightly warped – The brass fitting have aged nicely with a considerable amount of original lacquer still remaining