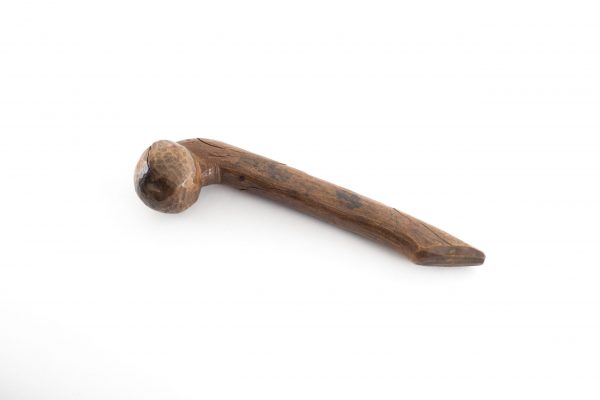 A very nice, carved wood, miniature example of a Native American Indian ball club.  It was probably used in rituals and kept in a sacred bundle. It is from the late Jim Dresslar Collection, relic hunter and owner of the American Frontier Museum in Bargersville, Indiana. Mr. Dresslar had an outstanding collection of relics dating from the pre-historic period up to and including Wounded Knee. His collection contained a large and comprehensive display of, amongst other items, Trade Silver, Powder Horns, Indian Guns, Kentucky Rifles, Stone artifacts, Accoutrements, Frontier Knives, etc. He died in 2011, creating a void in our collecting community yet providing a vast number of relics to be passed down to present, and future collectors.  A real piece of history that would display nicely, in anyone’s collection.  It has been featured in at least one of Jim Dresslar’s published articles, titled “The Ball-Headed Club of the North American Indian”, American Society of Arms Collectors Bulletin 59, page 33-37, 1988.  It is on page 37, photographed with another miniature ball club, which we also have in our inventory.

Condition: Wonderful untouched age patina with some shrinkage which has caused several cracks at grain lines, but not affecting the integrity of the club