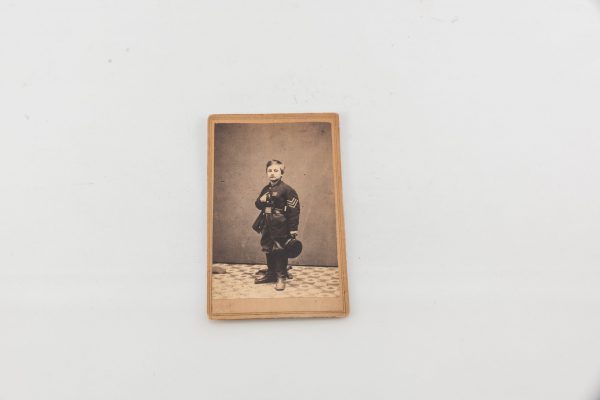 An original, 1863, carte de visite of Lance Sergeant John Lincoln Clem, at the age of 12.  He is in uniform, posed much like Napoleon, with his hand inside the front of his jacket.  The photograph is back-marked by the photographer, Morse’s Gallery of Nashville, Tenn.  It is also inscribed with pen & ink, “This boy shot a rebel soldier and was made ‘The Little Colonel'”.  And at the bottom “John Clem” is written in pencil.  On some of the Military records his last name is spelled with a “K”.

Johnny Clem (1851-1937) attempted to enlist in the 3rd Ohio, at the age of 9, and was refused.  So he tried, a second time, with the 22nd Michigan Infantry, and was accepted as their mascot and honorary drummer boy.  The officers paid his salary, until he was able to officially enlist, in 1863.  His young age did not shield him from battle.  He carried a shortened musket.  At the battle of Horseshoe Ridge, he shot a Confederate Colonel.  He was promoted to Sergeant, becoming the youngest soldier ever to become a non-commissioned officer in the United States Army.  He went on to fight at Perryville, Murfreesboro, Kennesaw and Atlanta, where he was wounded twice.

He was discharged in 1864, at the age of 13, but rejoined the military in 1870.  General U.S. Grant nominated Clem to West Point, but he failed the entrance exams, three times.  In his second military career he rose to the rank of Colonel, and Chief Quartermaster, by 1906.  He retired as a Major General, in 1915, just before the US entered the “The Great War”.  He was the last Civil War Veteran to actively serve in the United States Army.  He died in 1937, and is buried at Arlington National Cemetery.

Included with this CDV is a set of his military records, as copied from the Federal archives, several copies of articles about him and his service, and ten photographic copies of him and his family.

Condition: Very good with only very minor marks to image, with NO fading – Card has yellowed with age, and corners are ever so slightly bruised